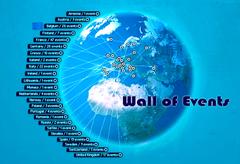 UNRIC - the United Nations Information Centre for Western Europe is launching its second European public information campaign, “CoolPlanet2009”, to raise awareness on environmental issues and to mobilise citizens in support of a new climate agreement. 2009 is widely regarded as a crucial year in the global combat against climate change.
The campaign will be introduced at a Press Conference held jointly with the Road to Copenhagen initiative and the leader of the Náttúra NGO, Icelandic singer Björk who is the first engaged member of the civil society to join the CoolPlanet2009 campaign. Björk recently launched the climate friendly informal ecological movement “Náttúra” (www.nattura.info) to promote green economy initiatives.

The centre piece of the campaign will be a website which will be launched early 2009.
"CoolPlanet2009 is designed to inform and engage the European Public, governments and civil society in general. The website will be a market place of ideas and host a Wall of Events where you can post your own ideas and initiatives and see what others are doing," UNRIC director Afsane Bassir-Pour says.
The website will include information on climate change and how individuals can act in a climate friendly manner in their daily lives.
At the press conference there will also be introduced a partnership between UNRIC and the Road to Copenhagen initiative under the leadership of Margot Wallström, vice-president of the European Commission, Gro Harlem Brundtland, United Nations Special envoy on climate change and Mary Robinson, vice chairman of the Club de Madrid.
The press conference takes place in connection with an important “Road to Copenhagen” conference and workshop ‘Last Stop for Climate Action before Poznan’.

“It’s important to realize that Iceland will exceed its Kyoto commitments if the aluminium plants at Helguvik and Bakki are built, although the 8 million tonne limit of carbon dioxide will probably not be exceeded before 2012. Iceland’s environment minister Thorunn Sveinbjarnardottir is of the opinion that Iceland should not ask for a repeat of the exemption in the upcoming climate change negotiations . I feel Iceland needs to seriously reconsider it´s direction dealing with climate change ,  if it is to work amicably with the worlds nations.”

After touring for 18 months I was excited to  return home 10 weeks ago to good, solid Iceland and enjoy a little bit of  stability. I had done a concert there earlier this year to raise awareness  about local environmental issues - especially sustainable alternatives to aluminium  smelters -  10 per cent of the nation attended the concert ; but I still felt it  wasn’t enough.

So when I got home I decided to contact people all over the island who had attempted to start new companies and bring in new ways of  working, but had not succeeded. For a long time Iceland’s main income had been fishing, but when that become uneconomic, people started looking for other  ways to earn a living. The conservatives in power thought that harnessing  Iceland’s natural energy and selling it to huge companies such as Alcoa and  Rio Tinto would solve the problem.

Now we have three aluminum smelters,  some of the biggest in Europe; and in the space of the next three years they  want to build two more and expand one of the older ones . The majority of Icelanders are against this. They would  rather continue to develop smaller companies that they own themselves and keep  the money they earn. Many battles have been fought in Iceland on these  issues.

In one of these battles ,  last june , the Minister for the Environment forced Alcoa to include the impacts of energy  exploiting in their Environmental Impact Assessment. This had not been done with the previous smelters . The smelter would need  energy from a handful of new geothermal power plants and possibly also some  dams. This would damage pristine wilderness, hot springs and lava fields. To  take THIS much energy from the geothermal fields is not even sustainable as it might cool down the fields in only few decades. Usually I don’t notice politics. I can quite happily live in the land of music-making.  But what did get me caught up in it was how politicians seem bent on ruining  Iceland’s natural environment. And I read last week that because of the  economic crisis, few parliament members have even  suggested that the law on Environmental Impact Assessment should be  ignored in the future so they can build their dams as quickly as possible.

The politicians keen on the smelters built in iceland , forced through exemption from the Kyoto Protocol that went into effect in 2005 . Because Iceland derives 72 percent of its energy needs from renewable energy and had little heavy industry at the time the Protocol was agreed, the country was allowed to increase its greenhouse gas emissions by 10 percent from their 1990 level, rather than decrease emissions by at least 5 percent like most of the other signatories are required to do. Since then  2 smelters have been built . Now , iceland churns out 17 tonnes of greenhouse gases per capital , while the European average is 11 tons . It’s important to realize that Iceland will exceed its Kyoto commitments if the aluminium plants at Helguvik and Bakki are built, although the 8 million tonne limit of carbon dioxide will probably not be exceeded before 2012. Iceland’s environment minister Thorunn Sveinbjarnardottir is of the opinion that Iceland should not ask for a repeat of the exemption in the upcoming climate change negotiations . I feel Iceland needs to seriously reconsider it´s direction dealing with climate change ,  if it is to work amicably with the worlds nations .

We need to define what sustainable green energy means . Too often these words are abused . Thermal energy can be green , clean energy but if harnessed too quickly and violently as planned for alcoa , it is not sustainable .  I found it  admirable when  Norway banned its sovereign wealth fund from investing in Rio Tinto because of environmental concerns last september .They did not want to contribute to serious environmental damage . it should be a good example to iceland.

when the economic crisis hit , the organization i´m part of , nattura.info ,  were in the middle of series of workshops discussing possibilities of start-up and spin-off companies that would work in a sustainable  way .  For the  first time in my life, I was surrounded by economists and financiers, and  people with small businesses in trouble . Young families are threatened with  losing their houses, and elderly people with losing all their pensions. Around this christmas they expect 10 – 20 % unemployment . This is catastrophic . Gigantic loans, it was revealed, had been taken from  abroad by a few individuals and without the full knowledge of the Icelandic  people. Now the nation seems to be responsible for having to pay them  back. And in this emergency situation it felt nothing short of miraculous how much people are ready to take on to make the change possible . The energy there now is perhaps desperate but also enormously ready for change and ready for the risk and hard work it will take .

Iceland is a small country. We missed out on the industrial  revolution and my hope was that we would skip it completely and go straight to  sustainable hi-tech options. If someone could facilitate this, we could do it.  There is a wonderful characteristic in the Icelandic mentality - fearlessness,  with an addiction to risk-taking to the point of being foolhardy. I´m not sure  the stock market is the right place for these characteristics . In music  making, storytelling and creative thought, this risk-taking is a great thing.  And after being introduced to a lot of Iceland’s small, growing companies I  realized the potential . There are a lot of companies on almost fully formed , on the verge of standing and turning in profits . Sustainable ideas like for example geo chem , which could harness the sulphur pollution which comes from one the thermal energy plant to grow algae . Now this sulphur is killing a lot of the moss surrounding the geothermal plants but there could be built a  a 400 people work place ! Icelanders are highly educated in advanced sciences. We have  hundreds of people with phd in molecular biology , biotechnics  and  similar fields . We have several already successful companies in this field : vaki , marorka , marel , Össur, CCP,  and  so on. We also have a lot of doctors and people educated in the health  industry .  because of the hundreds of naturally hot pools all over the  island and our ( so far ) almost untouched nature , we could easily become one  big lush spa where people could come and nurse their wounds and relax …  we could run more or less all transportation with local electricity . And even without new dams being built . There is for example a lot of excess energy from our dams and thermal energy plants at night  when it is not much in use .

The icelandic energy companies and the government don´t have a sustainable relationship with rio tinte and alcoa . To get them to collaborate ,  they offered to build dams for them , they offered to sell them electricity for one third of what they pay in europe and gave them big discount on taxes . Meanwhile all the small icelandic companies had to pay full taxes and top price for the electricity causing many of them to go bankrupt . This is just one of many ways where the icelandic goverment  and the icelandic energy companies have made it a lot easier for alcoa and rio  tinte to operate there than the companies of their own countrymen . Perhaps they should reverse it .

Even though iceland has been independent for 60 years it behaved here as a colony. The servitude too eager . For me these are  relationships of another age . Children of the industrial revolution , when the word sustainable didn´t exist . Because the word sustainable is not only about leaving nature as we found it . We have to also be economically , emotionally and socially sustainable .

Iceland can be more  self-sufficient and more creative - and have an approach that is more 21st  century than 19th century. It can build fewer, smaller and greener dams. We could use this economical crisis to become totally sustainable . Teach the world  all we know about geothermal power plants .  It may take longer to build and deliver  profits but it is solid, stable and something that will stand independent of  the rollercoaster rides of Wall Street and volatile aluminium  prices.

And it will help Iceland remain what it is best at: being a gorgeous, unpredictable force of nature.