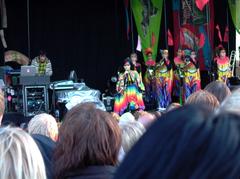 Over thirty thousand people attended the Nature concert on a beautiful summer eve in Laugardalur valley in Reykjavík this evening.

People started streaming into the valley in the late afternoon and at the time that Sigur Rós sat their feet on stage the hill was filling up.

Tranquiity and love lye in the air, fitting the occasion, that is to support nature and all things and businesses sustaining it.

As Björk came on stage the crowd had seen bits and pieces of Andri Snær's film „Dreamland“ on the big screen and some reactions uuhs and ohs were to be heard from the stunned audience. Some nature jewels Icelanders pride themselves of are many either endangered or have already been sacrificed on the altar of the governments heavy industry policy.

Björk performed one hit after the other and in spite of a sore throat managed to make an unforgettable performance pleasing the audience every step of the way.

Nature wants to thank everyone that made the concert possible, exspecially Björk Guðmundsóttir herself for her contribution to the fight for conserving the nature of Iceland. The website nattura.info aired today and the English version of Náttúran.is Nature.is made it's first appearance.