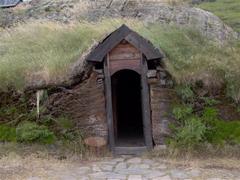 According to the Saga of Eiríkur (Erik) the Red, Erik lived at Eiríksstaðir in Haukadalur, and this is where his son Leifur (Leif) the Lucky is reputed to have been born. When Erik was outlawed after some killings, he sailed westwards, finding a land he called Greenland. In 985 or 986 he settled in Greenland. Around 1000 AD, Erik’s son Leif in his turn found North America (Vínland), five hundred years before Columbus sailed the Atlantic.

Archaeological research at Eiríksstaðir in the mid-20th century and again in 1997-1999 revealed the site of a 10th-century longhouse. The site remains visible, and in addition a reconstruction of the longhouse* has been built. Opened in 2000, on the millennium of Leif’s discovery of the New World, the building is based upon Eiríksstaðir longhouse site. Visitors to the longhouse are welcomed by guides in Viking-Age costume. Signs in the area mark historic sites, and Leif’s achievement is commemorated by a statue by Nína Sæmundsson. Courses are available for student groups. Café and shop in a Viking tent adjacent to the longhouse. Sites of the famous Laxdæla Saga are also in the vicinity.

*The picture is taken of the main entrance of the reconstructed longhouse. Photo: Guðrún Tryggvadóttir.