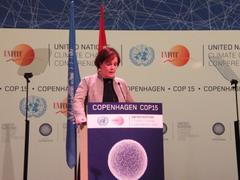 Icelandic minister for the environment Svandis Svavardóttir spoke at the COP15, Climate Change Conference in Copenhagen, tonight. She said:

Still, many of the effects of climate change are hidden from sight. Our greenhouse gas emissions are affecting our oceans, with potentially dire consequences. Ocean acidification due to higher carbon concentrations is a serious threat to the future of marine life, especially in the tropics and the polar regions. Fisheries is Iceland’s most important economic sector, and our livelihood and future depends on a healthy marine ecosystem. Climate change is a threat to ecosystems in the oceans as well as on land.

But that is why we are here – to avert catastrophic climate change. Iceland believes we must try to keep global warming below 2 degrees Celsius. Global greenhouse gas emissions will have to peak soon and decrease. Iceland is committed to become a low-carbon economy. We already rely 100% on renewables for electricity production and heating, and we will attempt to phase out fossil fuels for cars and ships. Afforestation and revegetation on eroded lands are important parts of Iceland’s climate strategy. We can and must conserve and reclaim forests and wetlands to help the climate as well as biodiversity. Better land use, supported by robust science and verifiable reporting, is an important factor in climate mitigation.

No country or group of countries can solve the climate challenge by themselves. We need a common framework and a global comprehensive agreement, legally binding for all. Developed countries must lead in mitigating climate change and cutting emissions. All major emitters, however, must take part, and smaller parties as well. Iceland will do its fair share. In partnership with other countries, Iceland is ready to take on significant emission cuts in the medium term. Iceland is ready, in a joint effort with the European Union, to cut emissions up to 30 percent from 1990 levels to 2020, as part of an ambitious global agreement.

We must empower people to adapt to the changes that will inevitably come. We can not succeed without using all our human resources. We have to empower women in every aspect of addressing climate change - in adaptation, in mitigation, in policy decisions and in implementing actions. Gender equality in climate affairs is not just a question of justice and fairness, it is essential for success. Women must be agents of change in building a sustainable future.

Iceland has come to Copenhagen to announce an ambitious target to cut greenhouse gas emissions, and a willingness to participate in a robust global agreement to curb climate change. The eyes of the world are upon us.

The hour is late. We will leave Copenhagen soon. But the challenge of climate change is not leaving. Our responsibility will follow us home. We have to build trust. We have hard work ahead of us: Leaders, governments and citizens of the world. Let us build a low-carbon sustainable future. Let us work together for a better planet Earth. The verdict of our children will await us.