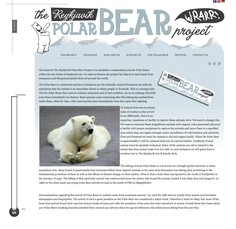 The basis for The Reykjavík Polar Bear Project is to establish a conservation area for Polar Bears within the city-limits of Reykjavík city. In order to finance the project the idea is to raise funds from companies and the general public from all around the world.

The Polar Bear is a protected species in Iceland as per the Icelandic Animal Protection act with the stipulation that the animal is an immediate threat to either people or livestock. This is a strange rule! The few Polar Bears that come to Iceland, exhausted and in bad condition, do so on icebergs that drift away from Greenland’s ice shelves. Most animals come swimming after the iceberg has melted from under them, often for days. After arriving they have immediately been shot upon first sighting.

In Iceland there are no proper rules of conduct as far as how to act differently, there is no expertise, experience or facility to capture these animals alive. We want to change this. We want to welcome these magnificent animals with respect, train personnel and erect a facility with proper equipment to capture the animals and move them to a specified area where they can regain strength under surveillance of veterinarians and scientists. First and foremost we want the animal to rest and regain health. When the Polar Bear is again healthy it will be released back into its natural habitat. Condition of each animal must be specially evaluated. Some of the animals are old or injured to the extent that they cannot make it in the wild. In such instances we will grant them a carefree rest in The Reykjavík Zoo & Family Park.

The killing of three Polar Bears in 2008 and 2011 brought global attention to these scandalous acts. Many found it questionable that Icelanders killed these vagrant animals at the same time discussion was taking place pertaining to the international protection of them as well as the effects of climate change on their habitat. Prior to that a Polar Bear was spotted in the north of Vestfjörður in the summer of 1993. The killing of that particular animal was controversial since the sailors who found the animal, hauled it into their ship and hanged it. In 1988 on the other hand one young Polar Bear arrived on land in the north of Fljót in Skagafjörður.

Documentations regarding the arrival of Polar Bears to Iceland come from numerous sources. Up until the 18th century mostly from annals and thereafter newspapers and biographies. The arrival of such a great predator as the Polar Bear was considered a major event. Therefore it must be likely that most of the bears that arrived found their way into history books of some sort with the exception of the ones that went unnoticed of course. Overall there have been about 500 Polar Bears reaching land documented from around 250 arrivals since the age of settlement, the oldest source being from the year 890.