Are Icelanders ready for electric cars? 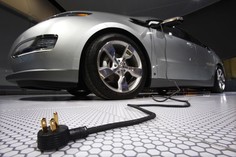 Most of the greatest cars manufacturers worldwide put a lot of effort to develop commercially available electric cars and most of them expect to release their products on the market until the end of 2012 at the latest. Some of the companies already offer electric vehicles e.g. Nissan Leaf, Mitsubishi I’MiEV, Tesla Model S and even full electric truck manufactured by Smith Electric Vehicles Company.

Batteries have been the major barrier in commercialization of electric vehicles. However, there has been huge technology improvement on batteries market recently. So what is a real barrier of electric vehicles implementation? The main current barrier seems to be people’s low level of knowledge about this technology. They do not realize that even with higher price of purchase the EV can provide some savings, especially now when oil price is peaking again. Most of current electric vehicle owners are early adopters with bigger care of environment and with higher knowledge about alternative technology in transportation.

The most promising markets for implementation of electric vehicles are places where electricity is cheap and generated from renewable energy resources. It seems to be a huge challenge for most of the countries worldwide but not for Iceland though. As a matter of fact, the price of electricity in Iceland is the lowest one comparing to all EU countries and on top of that it is mainly generated in hydro and geothermal power plants. Moreover, two thirds of the population is concentrated in Great Reykjavik Area therefore do not drive long distances daily. All of this makes Iceland the best place to start electric vehicles implementation.

According to many researches, electric grid is strong enough to withstand the increase usage of electricity demand. Thus, the implementation of electric vehicles in Iceland can also solve a problem of using such a high renewable energy potential as it is too expensive to connect Icelandic electric grid with any other country.

There are many other benefits such as lower pollution in the country, green jobs and energy independency, which is especially important for countries which are aiming at putting crisis times behind.

Besides, becoming more carbon neutral economy can change an image of the country form bankrupted to the most environmental friendly. However, it strongly depends on people and whether they agree to take a part in the shifting process from internal combustion engines to full electric vehicles because demand is responsible for creating its own supply.

Bearing all the said above in mind, we have decided to conduct a socio-economic survey on the Icelanders to check their current opinion about electric vehicles. We hope this will be our first step to make Iceland an example of transportation revolution for the rest of the world. We would like to ask you for your support in promotion of our survey already published on Facebook where vast majority of Icelanders have their accounts.

We hope to shape better future of Iceland together. In order to do this, please spend couple of minutes responding to our survey and help us create a better life for future generations.