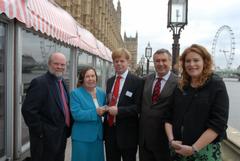 (London, October 16, 2007) – An Icelandic environmental campaigner today (Tues) receives a top international award at the House of Lords for his tireless work to protect wildlife and the environment.

Arni Finnsson, 49, who lives in Reykjavik, is chairman of Iceland Nature Conservation Association (INCA) and receives his award from the International Fund for Animal Welfare (IFAW). IFAW is honouring Arni with its International Animal Welfare Award at the 2007 Animal Action Awards.

Arni Finnsson has worked for more than 20 years to highlight environmental and wildlife issues, most notably campaigning to end whaling and protect whales for future generations to enjoy. He has also been a key figure in the campaign to protect the East of Iceland from environmental damage associated with the controversial Alcoa aluminium smelter development.

Robbie Marsland, Director of IFAW UK, said: “Arni is an animal welfare campaigner of the highest calibre and I am delighted that his work has been recognised by this important award. These awards are a celebration of the remarkable people who work tirelessly, and often without recognition, to improve the lives of animals in the UK and abroad.

“I am proud to help honour their achievements today. Hopefully, Arni’s story will inspire others in Iceland to take action to help animals in need.”

The prestigious awards ceremony, part of IFAW’s Animal Action Week campaign, is being held in the Cholmondley Room and riverside terrace at the Lords and is hosted by Baroness Gale. The awards were announced by TV wildlife presenter Shauna Lowry and IFAW patron, actress and model Lisa B is also attending.

Despite the seemingly insurmountable task of changing public opinion on support for whaling, so long considered an intrinsic part of being a true Icelander, Arni has always remained a strong and confident voice against whaling in the Icelandic media.  He has won the respect of his fellow Icelanders, despite being outspoken on such a controversial issue.

Arni has worked with various organisations including IFAW, Greenpeace and WWF, leading the fight for conservation of nature in Iceland. This has taken considerable strength of character and determination, but is now reaping rewards for whales with many more Icelanders questioning the logic of the country's whaling policy and realising that whales should be protected.

IFAW’s Animal Action Week is supported by Nat Geo Wild TV and is run in 14 countries around the world. This year nine awards are being presented in the UK.

Arni Finnsson established the Iceland Nature Conservation Association in 1997. It now has 1,300 members and is the largest group of its kind in Iceland. He has also worked to create new national parks and is a leading voice internationally over climate change.