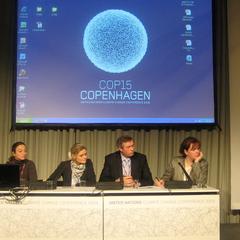 Icelandic minister for the environment Svandis Svavardottir adressed the problem of acid oceans at the COP15, Climate Change Conference in Copenhagen, yesterday. She said:

We have heard some very interesting presentations and voices here today – voices from different parts of the world. Or perhaps not so very different parts. We may be far apart geographically, but the ocean connects us. The Gulf Stream takes a few weeks to move warm waters from the Caribbean to the cool shores of the North Atlantic. There is a so-called global conveyor belt that circulates ocean water around the globe and brings stability to the Earth's climate. The sea unites us as much as it divides us.

The ocean is our ally in mitigating climate change. In the last two centuries, the seas have absorbed a quarter of the carbon dioxide that humans have pumped into the atmosphere. Some of it rains down on the ocean floor, some of it just dissolves in the ocean, changing its chemistry. But we are losing this ally. Recent research has shown that the capacity of the oceans to soak up carbon dioxide from the atmosphere is diminishing. This is a cause for worry.

The plight of coral reefs is another cause for worry. We have already lost much of coral reefs, and they are disappearing at the rate of 1% a year or faster. We are talking about the home of some one million species, a quarter of marine biodiversity, that is dying at a frightening rate. Coral reefs are bleaching in many parts because of higher temperatures. Add to this the acidification of sea water, caused by its uptake of carbon dioxide. This is a problem that has been mentioned here and is getting increased and much deserved attention.

More acid oceans means that marine creatures have increasing problems to form shells and skeletons. With present trends, the coral reefs will stop being able to grow before the end of this century. If we do not succeed in halting climate change, it is possible that some people at this conference will live to see the end of coral reefs, the rainforests of the sea.

That is a frightening prospect. Not only for tropical countries, but for all of us. Recent studies show that acidification around Iceland and in the northern Atlantic is about twice the global average. This is bad news for cold-water corals. It is also bad news for calcifying phytoplankton. Now these creatures are not household names, and quite some tongue-twisters. But phytoplankton are what plants are on land, the basis of the ocean food chain. We should be quite worried about the future of calcifying phytoplankton - as well as that of shellfish and other creatures that are affected by acidification.

We should be concerned about marine life in general, but we should be even more concerned about people. Coral reefs provide important ecosystem services for half a billion people. About one billion people rely on the ocean as their primary source of protein. Fisheries are a mainstay of many coastal communities around the world. As for my own country, fisheries is Iceland’s most important industry. Threats to the marine ecosystem are threats to our economy and society.

I and some others here have perhaps painted perhaps a bleak picture on the future of the oceans. It is not as if there are no bright spots. Iceland and many other countries strictly regulate their fisheries to ensure sustainable fishing. Iceland has also put great emphasis on halting pollution of the oceans, and we are most certainly not alone in this. We have had considerable success in forging international instruments like the Stockholm Convention on persistant organic chemicals and the Global Programme of Action against Pollution from Land-Based Sources. We are discussing a new international instrument to reduce mercury pollution. These efforts are working.

Regional cooperation is of utmost importance in ocean governance. In our part of the world, the OSPAR convention has been useful in regulating polluting activities and reducing the flow of radionuclides and other pollutants into the Northeast Atlantic. We have taken many positive steps in the sustainable use of marine resources and conservation of its ecosystem. We have plenty of examples of national, regional and multilateral action in this regard that has been successful.

We are also making progress in ocean science. It is often said that we know more about the surface of Mars than the bottom of ocean, so this is important. Globally, the United Nations has taken steps to bring about a global assessment of the oceans, which will help us get a comprehensive overview of the state of the marine environment. Next year, the OSPAR convention will issue a major assessment report of the state of the Northeast Atlantic. It is being drafted now, but the word is that it makes clear that the systemic change that climate change is bringing about in the marine environment is overshadowing most or all other challenges in ocean management.

This is not a surprise. We are slowly but surely tinkering with some of the fundamentals of life in the sea. By mid-century the oceans will be more acidic than they have been for tens of millions of years. CO2 concentrations of 550 parts per million will cause acidification that will be disastrous for ecosystems in many parts of the world, scientists warn us. The changes in the sea is the silent crisis within the crisis of global climate change. We need to make this silent crisis known, loud and clear. The science of ocean acidification is young, but the evidence is irrefutable. I have not heard skeptics doubt that it is taking place or that it is a serious concern. If such doubters exist, I hope that they are right. But as a Minister from a nation that lives literally off the ocean’s resources, I can not just cross my fingers and hope that science is wrong. We do not have the right to play dice with the web of life and our childrens future. The seas have been our livelihood for 1100 years. We need to ensure that it remains so for the foreseeable future.

I would like to thank all those who organized and contributed to this meeting. Iceland would like to forge an alliance with those who want to highlight the fate of the oceans in climate change. The sea unites us, as well as our desire to solve  the climate problem and seize the future.